Few historians have the courage to challenge entrenched views, or historical misconceptions. Onyeka is one of those historians, who in Blackamoores: Africans in Tudor England, Their Presence, Status and Origins invites us to relook at Tudor history. Onyeka has spent over fifteen years researching more than 250,000 documents from all over England: Blackamoores is the result of that research. Tudor history is one of the more popular subjects for historical scholarship.

It is also popular with film makers and is often portrayed in television, unfortunately this can result in us imprinting or conflating myths with scholarship. These myths have a life of their own, often without their being an acknowledgement of how they began. One of these myths is that the population of Tudor England was monolithically white. The other is that any Africans present there were statistically insignificant. A third idea is that those Africans must have been transitory or temporary visitors, or that they were all slaves, who automatically occupied the lowest positions in that society. In Blackamoores Onyeka challenges all these ideas, and proves that not only were Africans present in Tudor England, but that they played an important role in the development of that society.

We speak with the author about Blackamoores and what his work will do to our perspectives on history. 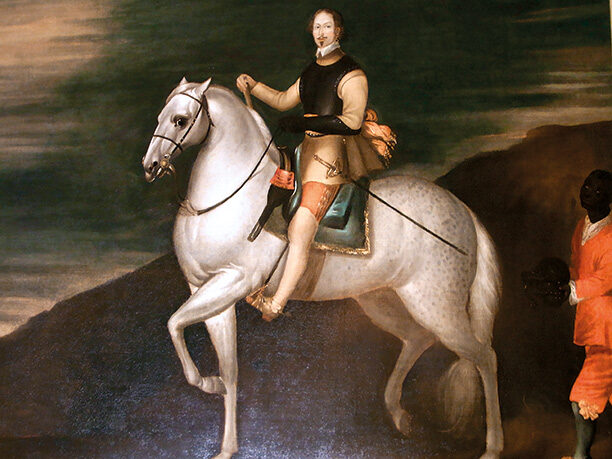 Peregrine Bertie, Lord Willoughby d’Eresby (1555-1601) in an anonymous oil painting. His African servant is following from the right carrying a skull, suggesting this was a posthumous portrait. Grimsthorpe & Drummond Castle Trust/Ray Biggs

Historians often divide evidence into two categories: primary and secondary, with the first term describing that created at the time, and secondary referring to that made after. Because of the lack of research on racial diversity in Tudor England, much of my research is based on primary records, some of which no one has written or spoken about before. During my research for Blackamoores, I investigated a range of primary public sources including parish registers (discussed below), and records called subsidy rolls. Subsidy rolls contain details of subsidy payments paid by local people in a parish. Those people living in a parish who were strangers, aliens and foreigners often paid more. Other evidence includes correspondence such as petitions written to members of the government, and there are proclamations created by Government officials on public matters. Finally, there are transcripts of court cases, and financial accounts. The latter are important because they may provide details about why the recipient received a particular sum of money.

Some of the documents mentioned above are now stored in national, regional and local museums and archives. These include the British Museum, National Archives, Victoria and Albert Museum, National Portrait Gallery.

Private correspondence may include documents and images etc, but the difference is that the creator did not intend them for public consumption. Some of this evidence is kept at stately homes or is owned by ordinary citizens.

Most English parish records were created after two orders by Thomas Cromwell a chief minister inside Henry VIII’s government. These documents were created to record people present in England, but also provide a register which could be used for tax purposes, and could identify dangerous aliens. Parish records record baptisms (but not births per se), marriages and burials (but not deaths per se). Often these records are not comprehensive, because in most cases the church had to agree to carry out your service for you to appear in their documents. Other people who were part of non-conformist churches or were of ‘no church’ may not be recorded at all. In theory, parish records were made to include everyone in a parish, with punishments for clerks and priests who failed to complete these documents. But these punishments were rarely enforced. Having said that some records are more detailed than others, and this may be because the priest or clerk in that parish was more diligent and efficient. Of course, the limitation with this evidence is that they more often only provide us with knowledge of a persons’ first moments (baptism), and their last (burial).

It should also be remembered that some records have been lost because of the dissolution of the monasteries in 1536, or as a result of other schisms such as the reintroduction of the six articles in 1539, and the Heresy Acts 1554. Other parish documents are now incomprehensible, because of their age or water damage. Having said all that, by examining parish records we get a snapshot of the people living in English parishes, which shows that England was a very different place than that described by most historians.

Many historians have proposed that the two letters of 1596 and the proclamation of 1601 issued by Queen Elizabeth I, are pieces of evidence that show African people were forcibly removed from England.

These documents were not drafted by Elizabeth I, but by others who attempted to link her name to their endeavours. These documents did not lead to a mass exodus of Africans because the writers of the letters state unequivocally in other correspondence, that they ‘could not get any.’

In the book, I discuss that it would not have been possible to forcibly remove people from England on the basis of race; as there were no ‘special race laws’ in place that permitted people to be sold into slavery on the basis of their race. The ‘science of race’ did not exist in Tudor times. Furthermore, African people were an integral part of Tudor society and made significant contributions to the communities they lived in, to extricate them from their parishes would have been an affront to the common law of the land.

Most records simply record individuals. However, sometimes a record describes a mother and child, and there are remarks about the father and whether their child was legitimate. Within that record we therefore have a reference to a whole family, even though what is written may only be a single line. Other parish records which contain memorandum daybooks include more detailed information on families. And just occasionally, some records such as that for Henrie Jetto enabled me to trace his descendants from Tudor England all the way to the present day.

Pictures and images are important because they show us what people actually looked like. And we do have images of Africans in Tudor England such as that of John Blanke in the Westminster Tournament Roll of 1511. This was commissioned by Henry VIII and shows Blanke ‘the blacke trumpeter’ twice, as it depicts before and after the celebrations for Henry VIII’s son. At that event Blanke formed part of the group of musicians who were responsible for officially opening and closing the event, interestingly this is a role usually reserved for knights or gentleman.

John Blanke does not just appear on the Tournament Roll, but also in financial accounts of the time. We know he existed because he is named and the amount he was paid is stated in those records dating from 1507. We also know that he got married and that his mother was present in England with him. However after 1512 he disappears from the archives.

It is important to remember England in the sixteenth and seventeenth centuries in terms of culture was behind the rest of Western Europe. For example, in Spain and Portugal, King Ferdinand and Queen Isabella and later the Habsburgs commissioned artists from all over Europe, to record their times, events of pageantry, and depict scenes from the Bible, Greek and Roman legends etc. Africans appear in many of these depictions, sometimes as part of the background, or occasionally as central figures. These images of Africans are to be found throughout Europe. In England however patronage of that kind in the early Tudor period was rare. Later on artists were commissioned to paint English royalty and some members of England’s aristocratic classes. So the images of Africans in Tudor England are less common than those in mainland Europe at the same time.

In Europe Africans occupied positions at every level of society. Some Africans came into Europe as conquerors or entered royal families through marriage or morganatic relationships. Other Africans were visiting foreign kings or noblemen and had their likeness depicted by European nobility. Sometimes this was for European nobility to promote the idea that they were capable of developing international relations independently of papal influence. The images of the Africans that we see in European art, reflects the range of positions these people had. But it is significant only a few images show people that we may now call slaves.

The writings of William Shakespeare, Christopher Marlowe, Ben Johnson, Thomas Dekker, and Edward Herbert of Cherbury describe Africans and refer to Africa. But they do not refer, except by allusion, to a resident African Tudor population. This is because their plays are mostly set outside of England or describe events taking place in ancient history. However, in Shakespeare we see African characters who contradict a notion that all Africans were transient slaves at the margin of European society, and this provides a window by which we might see how Africans lived in England.

Hopefully this work gives us a more realistic understanding of England’s past and that the inclusion of people of African descent is not ‘political correctness gone mad;’ but represents this country’s history.

To never give up doing the research and never be daunted by the odds that may be against you. Throughout my research I have learnt to be become accustomed to verbal and physical threats, or what is worse, indifference, often from ‘very well educated’ people who are afraid of this work. What is unfortunate is that up to this moment no University has been willing to support this ground-breaking research, and this is an indication of how far we have to go.